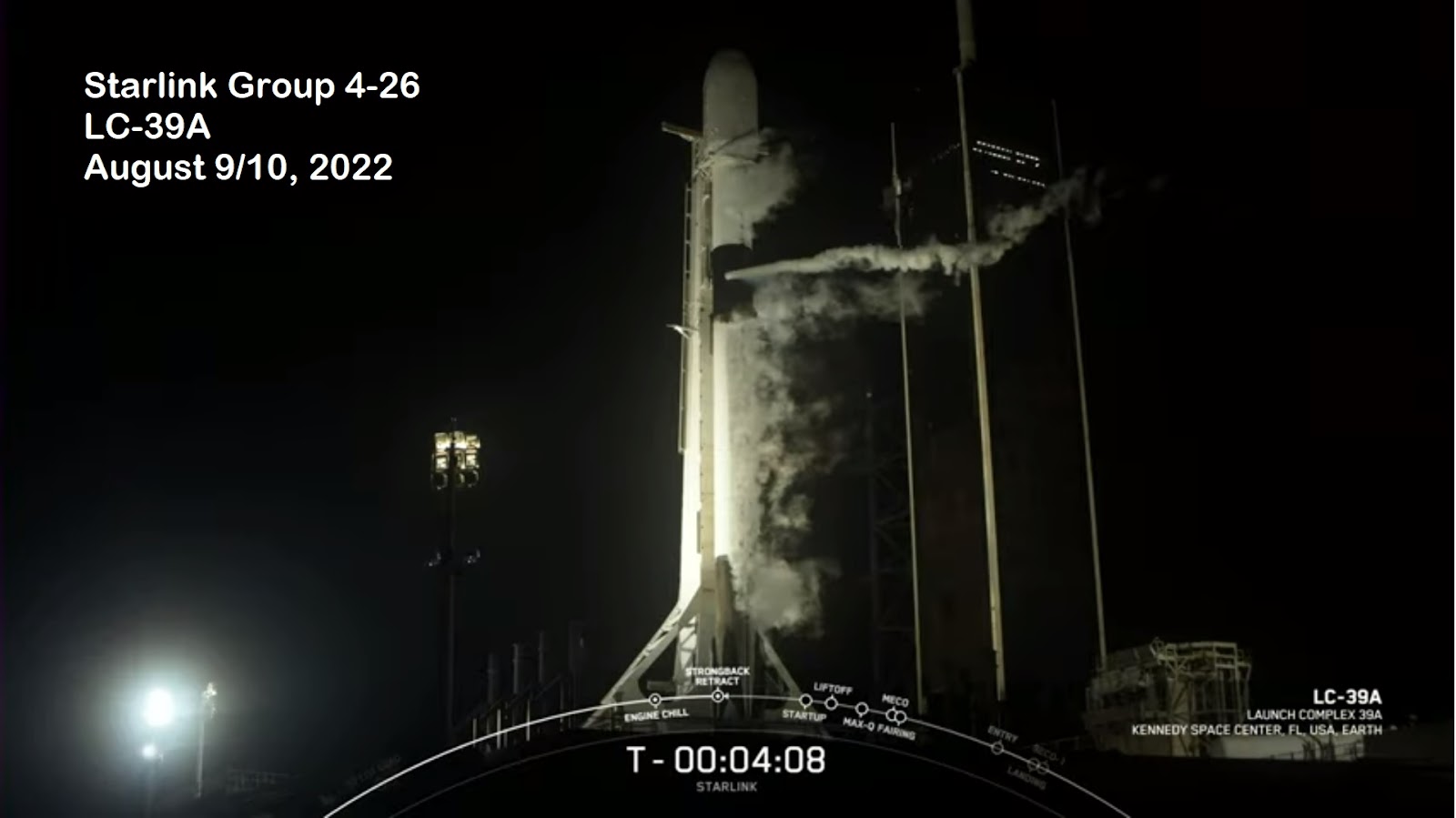 Screenshot from SpaceX Webcast of the launch of Starlink V1.5 Group 4-26

253 Starlink satellites have already been deorbited, 44 failed to respond after deployment or were rejected during in-orbit testing. Starlink Group 4-26 marked the 23rd launch to the fourth Starlink shell.

After boosting the second stage along with its payload towards orbit, the first stage will perform a 20 second re-entry burn to slow the vehicle down in preparation for atmospheric reentry. The booster will then perform a 20-25 second landing burn and softly land aboard SpaceX’s autonomous spaceport drone ship.

SpaceX will also recover both fairing halves in the Atlantic Ocean with the recovery vessel Doug, named after Demo-2 Astronaut Doug Hurley.

B1073-3 will have made its third flight after launching the following mission:

SpaceX is the first entity ever that recovers and reflies its fairings. After being jettisoned, the two fairing halves will use cold gas thrusters to orientate themselves as they descend through the atmosphere. Once at a lower altitude, they will deploy drogue chutes and parafoils to help them glide down to a soft landing for recovery.

Falcon fairings halfs have been recovered and reused since 2019. Improved design changes and overall refurbishment procedures have decreased the effects of water landings and led to an increased recovery rate of fairings.

The fairings are a used pair from previous missions with no known joint mission. Both fairings survived the landing. Active fairings are equipped with four pushrods to separate the two fairing halfs.

Fairings had evenly spaced venting ports that have been redesigned a number of times by having first ten, then eight and now having their venting ports built as close pairs along the fairing edge. This prevents saltwater from the ocean from flooding and sinking the fairing, and makes refurbishment toward the next flight easier.

SpaceX plans to offer “better than nothing” service in North America by the end of 2020 and estimates that once complete, its venture will make $30-50 billion annually. The funds from which will, in turn, be used to finance its ambitious Mars program.

To achieve initial coverage, SpaceX plans to form a net of 12,000 satellites, which will operate in conjunction with ground stations, akin to a mesh network.

Furthermore, the company recently filed for FCC permission on an additional 30,000 spacecraft, which, if granted, could see the constellation amount to a lucrative 42,000. This would octuple the number of operational satellites in earth orbit, further raising concerns about the constellations' effect on the night sky and earth-based astronomy.

For more information on Starlink, watch the Real Engineering video listed below.

Each Starlink V1.0 satellite is a compact design that used to weigh 260 kg. SpaceX developed them to be a flat-panel design to fit as many satellites as possible within the Falcon 9’s 5.2 meter wide payload fairing. 60 satellites were fitted into a dispenser affixed to the second stage.

The entire Starlink payload weighs around 16,250 kg. That’s near the limit that a Falcon 9 can lift into LEO and still have enough propellant for landing.

The first 29 launches of one testbed Starlink mission and 28 operational Starlink missions V0.9 L0 - V1.0 brought the number of launched Starlink satellites to 1623. 10 V1.5 Starlink went into polar orbit recently. How many that still work’s, or are in orbit, are mentioned in this old article. Sorry - I had lost count for a while. 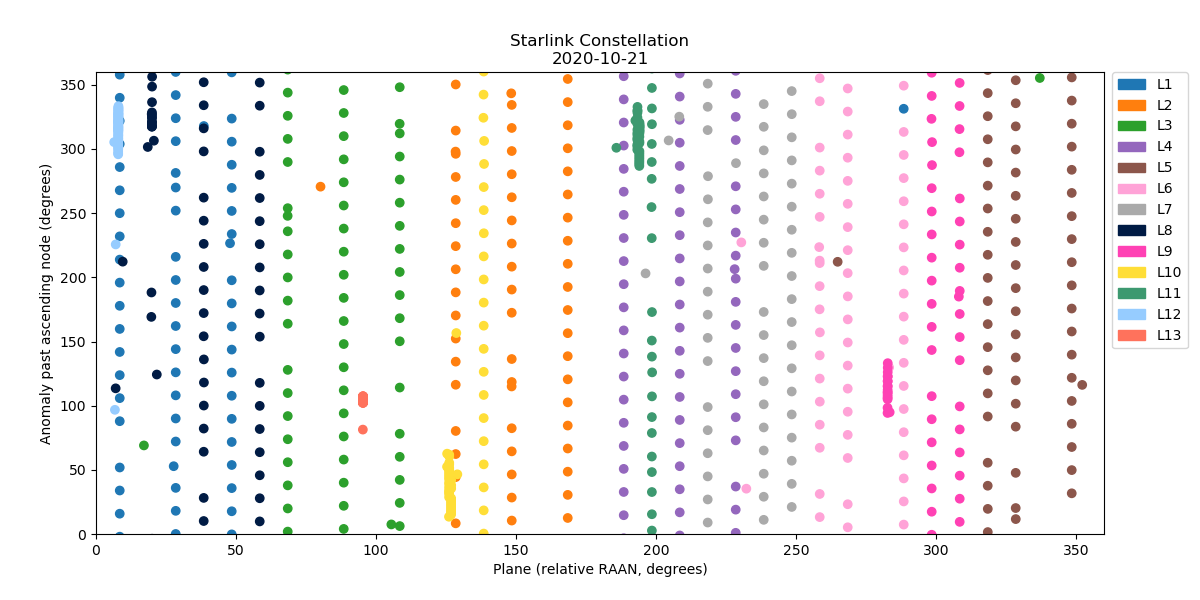 On board the Starlink 4-26 flight are 52 of SpaceX’s Starlink V1.5 internet satellites, which will now join the V1.0 satellites already in orbit.

Of the 60 v0.9 satellites launched in 2019, 46 have reentered by now to date, 6 are still under some control with the remaining 8 either actively deorbiting or naturally decaying. The Tintin and v0.9 satellites will not be in the operational Starlink satellite constellation. These pre-satellites lack the communications payload needed for full operation.

SpaceX will assign 18-20 Satellite Vehicles to each of three adjacent orbital planes. Orbital planes are to satellites as tracks are to trains – they are orbits parallel to each other designed to maximize area coverage while minimizing the number of satellites required.

Since early-December 2020, SpaceX has been altering the spacing of the satellites already on orbit.  It appears the company is arranging many of the planes to have 18 active satellites instead of 20, which would fill some small gaps and free up some satellites to act as spares. There will eventually be 72 planes of 22 satellites each in the initial Shell 1 of the Starlink constellation.

Look for an Animation by Ben Craddock for NASASpaceflight showing the movements of Starlink satellites into their orbital planes since August 1, 2020. The satellites from each launch split into three groups that each formed a plane.

Just a little peak in the current Starlink orbit mesh, it’s still a work in progress - small gabs does it

SpaceX plans to begin offering Starlink service to Canada and the northern United States later this year. Near global coverage is expected to start next year. Pricing has not been made public, but it has been hinted that speeds up to one gigabit may be possible.

The first orbital shell of Starlink satellites will consist of 1,584 satellites in a 53° 550 km low-Earth orbit. This is the shell that SpaceX is currently filling, and it is expected that this shell will be complete by June 2021. Once complete, the first shell will provide coverage between roughly 52° and -52° latitude (~80% of the Earth’s surface), and will not feature laser links until replacement satellites will launch sometime after 2021.

Completed - The surviving operational Starlink V1.0 is now using a few months to reach operational orbits in 72 planes with 22 Satellite Vehicles in each plus spares. This shell is currently near completion, with only 1538 working satellites minus 46 replacements.

Starlink's second shell will host 720 satellites in a 70° 570 km orbit. These satellites will significantly increase the coverage area, which will make the Starlink constellation cover around 94% of the globe. SpaceX will put 20 satellites in each of the 36 planes in the second shell. This shell is currently hosting 51 Starlink V1.5 Satellites.

The fifth final shell of phase 1 of Starlink will host 172 satellites in another 97.6° 560 km low-Earth polar orbit. Shell 5 will also consist purely of satellites with laser communication links; however unlike shell four it will consist of four orbital planes with 43 satellites in each plane. This shell does not host any Starlink V1.5 Satellites.

Innovative ion propulsion technology keeps these satellites in the correct position while on orbit. They use ion Hall-effect thrusters to achieve their working orbit. Each Starlink satellite incorporates an autonomous collision avoidance system. It uses the Department of Defense debris tracking data to avoid colliding with space debris or other satellites.

Starlink’s low altitude also allows SpaceX to easily deorbit malfunctioning satellites, even if their engines fail. Although 100 km is commonly described as the upper limit of Earth’s atmosphere, there is no “hard barrier”. Even at 550 km altitude, there is still a slight amount of atmospheric drag pulling the satellites down. Each satellite’s onboard ion Hall-effect thruster engine is powerful enough to keep it in orbit, but if the engine fails, it will fall back to Earth within about a year.

The minuscule atmospheric drag in low Earth orbit will help ensure that dead satellites don’t stay in orbit for long. This will help reduce the amount of space debris in orbit, which is rapidly becoming a major concern.

Constellations use multiple satellites working in conjunction for a common purpose. SpaceX plans eventually to form a network of about 12,000 satellites. They will operate roughly 4,400 satellites using Ku- and Ka-band radio spectrum, and almost another 7,500 satellites in the V-band.

To achieve initial coverage, Starlink will use 72 orbital planes, angled at 53 degrees from the Earth’s equator at an altitude of 550 km. They will put 22 satellites into each of these orbital planes, totaling 1,584 satellites. They will communicate with other Starlink satellites and with ground stations, akin to a mesh network.

In late 2019, the company asked the American Federal Communications Commission (FCC) for permission to launch an additional 30,000 satellites into orbits ranging from 328 km to 580 km in altitude. If the FCC okays the request, the constellation could grow to 42,000 satellites. This would increase the number of operational satellites in Earth orbit by at least a factor of 20 from pre-2019 levels.

The constellation’s large numbers are raising concerns regarding their effect on the night sky and Earth-based astronomy. However, Elon Musk stated that he is confident that SpaceX can mitigate light pollution issues and is working with industry experts to minimize the potential for any impact. Future Starlink satellites will use a sunshade that is a patio-like umbrella to reduce light reflectivity.

As was the case with a single Starlink satellite on the V1.0 L7 mission (launched on June 4), all Starlink satellites that will launch on subsequent missions “L8 - L28” going forward will feature a sun shade or visor, which will assist in blocking sunlight from reflecting off the majority of the spacecraft body while in orbit and reducing its overall albedo/intrinsic brightness as observed from the ground.

On August 3, 2022, SpaceX received special temporary permission to allow communications between Starlink satellites and U.S. ground stations at latitudes above 53 degrees using elevations down to 10 degrees, whereas the previous elevations were at or below 25 degrees. This is the first launch of Starlink satellites since the implementation of this special permission.

By August 2022 the Starlink constellation, which by now is available in 36 countries, will provide internet access to people around the globe. The trouble is with the lack of uplink transmitter stations, which need to be plugged into the internet.

I see a future, where You upload Your internet content to Starlink for storage, then You can let Others in remote areas use it by letting Them download it. The Starlink constellation becomes an Internet Server in space, if it has the memory capacity to pull that off.

SpaceX board member Steve Jurvetson recently tweeted that the company’s board had an opportunity to try out the user terminals at the company headquarters in Hawthorne.  The devices use a Power over Ethernet (PoE) cable for their power and data connection.  The antenna connects to a SpaceX branded router with Wi-Fi (802.a/b/g/n/ac, transmitting at 2.4 & 5GHz).  SpaceX is producing the antenna assemblies in-house while outsourcing production of the more common router component.

SpaceX continues to make progress setting up its network of gateways for the Starlink system. New gateways are being added in countries all over the world and will connect giant data servers to users through Starlink.

As of now, only higher latitudes are covered (between 44 and 52 degrees according to one source). However, SpaceX only needs 24 launches for global coverage. Given SpaceX’s current Starlink production and launch rate, Starlink will have global coverage by the middle of 2021.

The third shell will, when operational, provide service almost all over the world because Starlink V1.5 satellites will be visible from the north pole just over the horizon with a 70 degree inclination orbit at a 570 km altitude.

SpaceX is currently offering a beta version of the Starlink internet service, jokingly named the “Better Than Nothing Beta”. Users pay $500 for the Starlink terminal and router and then $99 per month for the service.

Invitations to participate in the beta were sent out to people who signed up through the official Starlink website and live in parts of the northern United States, southern Canada, and very recently the United Kingdom.

The results so far have been very promising, with SpaceX reporting speeds of 100mbps with 20-40ms latency, well below geostationary satellite latency. Many users have reported speed tests even higher than 100mbps.